Photo time !!! – I’m playing bass with our adult jazz trio – if you have any questions or if you’d like to sign up – simply send me a message – S 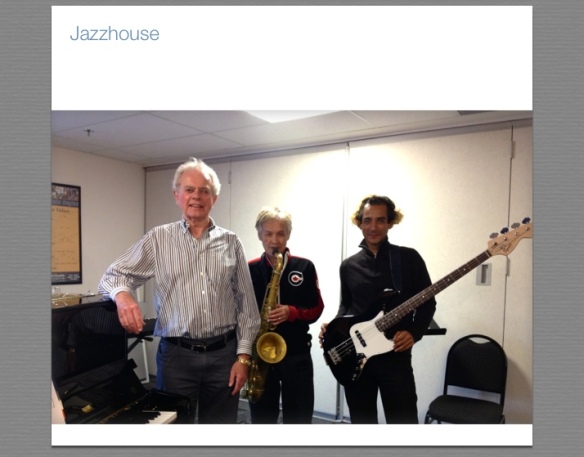 Let’s face it.. there are a bunch of us who get the butterflies before we step on stage, hit record in the studio, or read for a part at an audition. For some people this can make or break their performance before they even begin. But it’s not just about stepping in front of an audience. Some just have difficulty getting the best out of their performance in certain settings, like the studio or reading for a certain director. We understand.. & we’d like to help.

Join Master Hypnotist & Fellow Musician Collin Sonny Rosati for an afternoon of.. you guess it !

Have you tried all of the tricks and you still can’t get the words out right? Try coming out to our Performance Anxiety class where we combine common sense and experience with Hypnosis Meditation. It might sound a little strange at first.. But Hypnosis Meditations are great for quieting the nerves – & when you quiet your nerves – your real performance can begin.

Sonny has been a practicing Hypnotist for a long time.. It’s been almost 14 years since he left Hypnosis School and began helping with hypnosis…

Here’s a link to some of the old TV clips – http://thesunnyside.net/about/

Sonny has been bouncing around a bit this summer but he’s back home in Vancouver, and helping Actors, Musicians, Speakers, Comedians, Sales People, Teachers etc.. with Performance Anxiety.

Next month’s class will be.. Hypnosis to Overcome Approach Anxiety – This is based on the best of both the Inner Game Guy classes for confidence and the Romantic Magic Workshop to find true love.

Keep your eyes open for discounts through Groupon!

Cost $45 but there’s a Groupon deal available on the web!

We all know about IQ, and many will have had personal experiences where this often venerated measure of an individual’s cognitive ability not only misrepresented a person’s true technical aptitude, but completely failing to predict their performance in a modern workplace and/or society. Since the 1990’s and the greater exposure of emotional intelligence thanks to Daniel Goleman and his contemporaries, this topic has become more mainstream and gained a high level of acceptance amongst managerial circles and business gurus. Indeed, EQ (or Emotional Quotient) has infiltrated many aspects of HR and in particular managerial training in modern societies.

We all inherently know that an individual who can recognise and control their emotions and recognise the emotions of others in real time, is a much better communicator in general. Most will also recognise that such individuals are generally more effective and productive in the work environment (and life in general) when compared to someone of the same intelligence who is not as emotionally attuned.

Except for lofty heights of research and development specialists, it has reached the point where many will accept the notion that EQ is even more important than IQ in any role where communication is important, and even for many roles where it is not. As emotional intelligence and the ability for individuals to communicate with one another is so heavily tied to a person’s overall mental health the benefits extend well beyond the business life to the personal one. Anyone with even a rudimentary appreciation of the overall social and economic long term costs of mental health issues (the unspoken illness) will recognise the massive implications that such an improvement in society would offer to everyone.

So why is this not taught in high school, primary school and even kindergartens? It is likely that many people at this point would come up with at least a few of the multiple arguments against this proposition (even if only to predict what others might say) and I will attempt to address each one in turn to further this argument.

Some of the typical arguments against could be:

1. The perception that emotion intelligence breeds passive people who are less likely to stand up for themselves. Being able to identify and control your emotions doesn’t mean you are a doormat, let’s make this important statement very clear, it simply allows the individual to better analyse the situation and react appropriately. If the appropriate reaction to a given situation is the use of force, then that is the combined decision of emotional identification and logical reason, but even extreme force will greatly benefit from it being mostly detached from any emotion that caused it. This simple concept may be very alien to many people who always tie the use of force/violence to the emotion of anger or equivalent. This purveys all the way down the negative emotional side to reinforce the belief that without negative emotions spurring on an individual, they will not act in their own defence or interests when wronged. This stems from the inability to separate emotions into a part that helps the individual recognise a wrong, and the part that fuels the response. Emotions don’t have to fuel a response and it is a generally accepted belief that the more they do, the more dangerous and unpredictable the outcome. It is often forgotten that self-confidence is a cornerstone of emotional intelligence, and a self-confident individual will defend themselves when wronged without the need for anger to drive a response.

2. The perception that teaching behaviours is the soul right of the parent or guardian. This also ties in to people who would argue that it is the realm of the private or religious sphere. Modern emotional intelligence training and courses can very easily be made into a very neutral mental tool set (as it mostly is at its core). As emotional intelligence doesn’t explicitly state how to react to the perceived emotions, it cannot be accused of influencing any moral leanings or learnings. The only exception to this is the necessity to learn rudimentary empathy to be able to recognise basic emotions in others. Something that is principally acceptable for the vast majority of individuals and institutions.

3. The perception that this is only another additional burden in an already overcrowded curriculum and should be done by the parents. The inability of modern educational academics to agree on a suitable curriculum best illustrates the failing of the pure focus on IQ and knowledge quantity as the means to best prepare the younger generation for the rigours of working life. It will always degenerate into an argument of which part is more important than another, and given the infinite quantity of knowledge available this is a fruitless circular argument. Out of this inward looking drudgery is final emerging an ever more accepted notion that the knowledge itself is not the important matter, it is learning how to find, rate and most effectively utilise knowledge, which is the most valuable learning of all. How we search for, perceive, understand, utilise and pass on information (written and verbal) is a more valuable a measure of an individual’s usefulness to society then any volume of information on its own will ever be. Other than the three R’s (or better said their technical components), the majority of this is achieved through communication and focus, something which emotional intelligence is an undeniable key of. The haphazard, sometimes contradictory and often mostly unexplained way that emotional intelligence is taught by most parents can no longer be seen as the optimal way for this critical information to be effectively passed on. Despite many a parents best efforts, it will be just as big a hit-and-miss affair over the greater percentage of the population than years of geography, history science, maths, language (beyond the simple 3 R’s) or any other subject for that matter in fostering an interest in those subject and an appreciation as to how each one can be valuable in understanding ourselves, others and the world around us.

Being taught for five hours how a subject helps us understand ourselves and others and why it can be useful in developing the way we go through life, followed by ten hours of subject matter itself will always be considerably more valuable than simply twenty hours subject matter on its own. Emotional intelligence is the highest form of this type of learning. Effectively teaching us how we work and why we react the way we do at a base level, and most importantly, giving us additional tools to take control of ourselves to better achieve our aims in life.

4. The perception that there is insufficient teaching material and/or disputed techniques, material or approaches for emotional intelligence to be taught in schools. The continual developments in infant and young children’s education can often be easily gathered under the umbrella of emotional intelligence learning. The material and understanding of which is one of the fastest growing areas of understanding. Early learning is slowly gaining the prominence it has always deserved (mostly due to the greater importance placed on mental health, and subsequently, emotional intelligence). On the other end of the scale there is also extensive material as part of professional management training (most of which is just as applicable for late primary school and early high school).

EQ is now mainstream in all progressive management training and many early learning teachings for young children. So why is this critical curriculum still mostly absent from our primary and secondary institutes and not available to the general public? Its full and immediate implementation in high school and primary school is paramount to get this vital skill out to the general community.

All thought processes and techniques are a process of repetition learning. It is time we realise the critical worth of self-awareness and self-mastery in our society and allocate it the time required to promote this single most valuable life skill for the betterment of all of us.

If you still need convincing or would just like some good material, let me know, it is important we get this into the vision of as many people as soon as possible, this is a great opportunity to turn over the next leaf in our public education system and social education standards in general, let’s not waste time!

Just a reminder of what Sonny Sounds like on Sax.. His own composition – Blue Turtle with Etherial Quartet

More from our Friends & Personal Performances on Sonny’s fan page – I Love You Because..

More from our Friends & Personal Performances on Sonny’s fan page – I Love You Because..