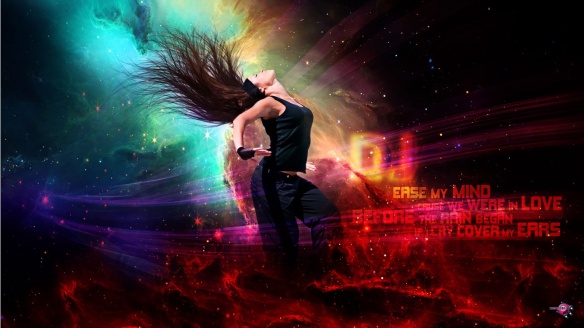 A trance generating loop is created when a certain quantity of perceptual repetition is reached sufficient to produce an altered state of consciousness. Some trance researchers describe this process as an awareness loop, or a circular flow of consciousness. It is believed that the looping alone is the only necessary and sufficient condition to induce a dissociated state of mind. So by now you already know what it is that the hypnotist does to produce this occurrence in another for “therapeutic purposes,” but now you will see how it is possible for a songwriter to perform the same “trick” using the medium of sound.

Music and the Trance State of Mind

The creation of a proper trance requires 3 conditions. The first is the existence of the dissociated state of mind. The second is the persistence of the dissociated trance plane. And the third is the manner or rate of substitution and timing. Each of these 3 factors must be present and reinforce one another by your design in order for your song’s music to produce the necessary susceptibility for a trance state upon the individual audience member. Moreover, it is necessary to utilize each of these three factors correctly or else the fascination and heightened sense experience your music possesses will lose its substance and not retain its trance value. Trance researchers are fully aware that music consists of many trance generation loops consisting of multiple rhythms, melodies, and words. As one listens to one specific rhythm or melody, when a certain value is reached, the melody is ‘learned’ and a dissociated trance plane is produced. To stabilize a trance state what one has to then do is provide an additional layered trance generating loop consisting of the dissociated trance plane AND the original trance generating loop.

After the creation of the trance generating loop, consistency of trance force is necessary to maintain the trance state which means that every part of a song’s composition must reinforce every other part. That is the heart of a technique I call “Hypnotic Songwriting.” With Hypnotic Songwriting, once all of a song’s content is available for sorting, the guiding principle should then be to ramp up its hypnotic elements by the elimination of any inconsistencies that may exist between the lyrics and music. Even within the lyrics you may find a series of inconsistencies between one line and another or between the verse and chorus. Similarly, the music may need to be changed as well. In some cases, you may find that the rhythm isn’t quite right because it somehow interferes with the melody or vice versa.

By carefully examining every part of the song musically and lyrically and making the appropriate changes to uphold the integrity of the lyrical message and musical presentation only then what you’ll find is that what you originally had for a song has been transformed into a successful hypnotic composition. But what exactly did you do? All you did to maintain and deepen the state of trance was to remove the negative trance elements and reinforce the positive elements with additional trance loops with an appropriate number of repetitions.

In general, instrumental music is very effective for creating trances because repetition is much more easily produced with instruments and is usually much more tolerable, when compared with repetitive vocal music. However, there are always exceptions such as with the repeating chorus at the end of some songs, which is very hypnotic. With instrumental music though, you should make it rhythmically complex, metrically asymmetrical if possible, and relatively slow, not changing quickly in tempo, and not too loud. But depending on the genre of music and the expectations of the audience, loud can be good.

Repetitive music does not have to be boring, so you need to make it interesting. This means, once again, you need to give it lots of repetition, slowly developing musical structures, longer measures, odd syncopations, and irregular sets of rhythmic patterns. If you need more clarification about what I mean take a hint from these Minimalists composers: Terry Riley, Steve Reich, Phillip Glass; Robert Fripp of King Crimson, as well as the Classical Music of India.

So in essence, the objective of the “Hypnotic Songwriting” approach I’ve described here is to engage the attention of the conscious mind and keeping it distracted with music by preventing it from wandering around with lots of different thoughts. By doing this we are able to communicate more directly with the unconscious mind. Therefore, if you use some, if not all, of the information I’ve given you here, over time you should be able to discover your own signature sound and formulas for creating songs others can’t get out of their heads.

Now that we know how the trance state is anatomically constructed let us analyze the impact of such a state on the human mind. Fortunately, researchers have discovered that there are 6 identifiable stages of trance which have been documented and I would like to share those with you now. The trance state can be divided into six different stages, each with their own set of characteristics. In the book Hypnosis: Secrets of the Mind, these stages are defined in the following way:

Stage One: lethargy and the start of relaxation.

Stage Two: patients will experience catalepsy in particular groups of muscles… they may also have the sensation of being heavy, or of floating. As with Stage One, this level is considered to be a light trance.

Stage Three: medium trance, as well as experiencing catalepsy the patient can be induced to smell and taste differently.

Stage Four: deeper medium trance, the hypnotist can induce amnesia-loss of memory-in the patient. This can be used with posthypnotic suggestions to ensure that the patient’s conscious mind does not get in the way of the work of the unconscious. Other phenomena include anesthesia-numbness-of parts of the body and analgesia-the state of painlessness.

Stage Five: light deep trance, is often associated with positive hallucination. This means that the hypnotist can induce the patient to see or hear something that is not there.

Stage Six: deepest level of trance, patients can experience anesthesia… Another phenomenon is negative hallucination, when the patient can be induced not to see or hear things that are really there. Somnambulism – or sleepwalking – can also occur at this stage.

When the conscious mind is suspended in the presence of a or several trance generating loop(s), trance logic produces manifestations such as the inhibition of critical thinking, intellectual processes, judgments, accurate recall, and decision-making. Moreover, awareness of the body is reduced and analgesia may be present. Self-observation is enhanced and hallucinations may be present. In deep trance, trance logic is found to function strongly in the mind and less so in lighter states of trance.

Here is a more thorough list of symptoms describing “trance logic.” These are just some of the symptoms that your listener’s may experience once they are in a light state of trance:

1. Critical judgment is decreased or disabled

2. There is a change in body awareness sensations

3. There is an increase in literalism and primary process thinking (images and symbols more than words) increases

5. Disabling or limiting of volition

9. Involvement in inner processes or contact with the unconscious mind.

To receive additional articles via e-mail and get exclusive access to FREE instant music downloads by Stereo Thesis, go to: http://stereothesis.bandcamp.com/

1 thought on “Music and Trance States of Mind”